Book 3, Raisin Bread and Somebody's Dead, coming out in August!


Who would murder the mailman? 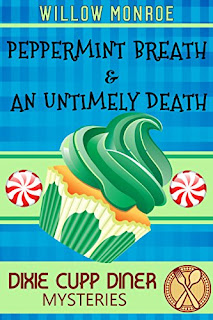 Starla Cupp, owner of the famed Dixie Cupp Diner, needs to win the Winter Festival Cupcake Contest, if only to wipe the smirk off Tiffany Sample’s face. The problem is that she doesn’t know a dang thing about decorating cupcakes and she has no time to learn.  Of course, none of that matters so much when she finds her mailman dead in the park during the worst winter storm of the season.
Kindly old Mr. Nettle has been murdered, and nobody can figure out why. The state police are called in to investigate, which brings handsome, home-grown Tucker Ashe back to town. Tucker is the last person Starla expected to see again – not that she’s complaining. With that much testosterone floating around things can only get more complicated, especially when Starla gets involved in the investigation that might just get her killed, too.
Dixie Cupp Diner is a Kindle ebook murder mystery series with plenty of mayhem, recipes, and a touch of sweet romance.

Amazon Customer Review:  "Nice and short with a good twist. The peppermint cupcake recipe looks delicious can't wait to give it a try."


Read for FREE on Kindle Unlimited!