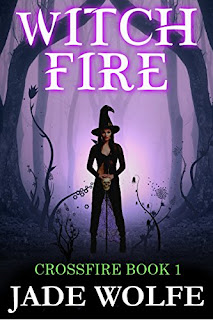 I’m Indigo Cross: college grad, underemployed, and ready to toss my roommate out the window. I’m at the end of my rope.As if that’s not enough, my crazy grandma just stepped into the picture. I didn’t even know I HAD a grandma. She’s telling tales of impossible monsters and ancient ancestors. She’s saying that I’m in line for some magical guardian role, but now I’m supposed to drop everything and run off to the mountains of North Carolina to be some kind of witch? I’m supposed to guard an invisible barrier and keep a bunch of paranormal beings corralled in one area? Really?I think she might have lost her mind, to be honest, but I also think she’s offering me a way out of my dead-end life. That is, until one of my new witch friends tries to kill me with homemade zombies.
Author’s Note:I love the urban fantasy genre. It’s amazing to think about what might be hiding out in the city, just under our noses, while we go about the business of living our lives. But I’ve always wondered about the vast uncharted territory of the wilderness in America, too. What is out there, hiding in those dark, untamed acres? What might be lurking in the shadows of canyons and caves, or behind that shivering copse of trees? Nobody knows, and the mystery is half the fun. Welcome to my cozy fantasy.


Read for FREE with Kindle Unlimited!