Get all five books in the Jagged Grove magical mystery series for one low price! 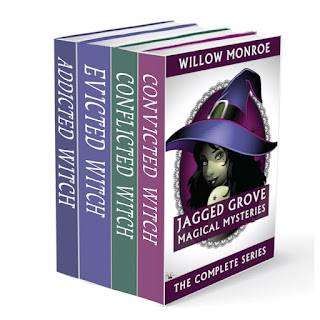 Trinket’s life is on track to be fabulous...until the moment when her mother screws up yet another magic spell and gets them banished from Earth by a sexy, mysterious agent of the A.S.S. (Abnormal and Supernatural Security). Now she’s in Jagged Grove, a town that doesn’t actually exist, to serve out her sentence as the witch healer of the whole island. The truth is, she stopped practicing her witchcraft a long time ago and she really has no idea what she’s doing.
If that isn’t enough, she has to deal with a too-sexy werewolf, an elegant vampire and her sweet but unhelpful mother. Also, there’s something fishy going on around here, and it’s up to Trinket to figure out what’s happening on the island before the whole place goes up in smoke.

Read for FREE with Kindle Unlimited!